One of the beneficial consequences of adopting a cosmology based on an exochronous (i.e. timeless) metric, is that process of simulating the evolution of the universe becomes much easier.  In fact the modelling of the accumulation and dispersion of gravitational potential can be achieved with a single line of computer code in an N-body particle-mesh simulation. This compares favourably to the complex Fast Fourier Transform methodology that is more commonly used in such models.  This short video shows the simulation model in action. Starting from a totally uniform universe, we can see how matter (the yellow particles) starts to clump together into filaments and disks, which ultimately will go on to form galaxies.  The simulation also shows the gravitational potential that is generated by matter (the red/purple dots), and in turn dictates how matter will move.  This potential is, essentially, what cosmologists currently refer to as ‘Dark Matter’.

I gave the first presentation of the Universe 4.0 model at the inaugural South Coast Cosmology Meeting, hosted by the University of Sussex.  To say that it didn’t go down too well would be something of an understatement.  Leaving aside the fact that I was trying to cram far too many new concepts into a 15 minute speaking slot, the nature of this topic was not really a good fit with the aims of the meeting, which, I believe, was to give PhD students the chance to share their current research with colleagues from other institutions.

However, the main surprise from my point of view was the fact that about 2/3 of those present at the meeting were broadly happy with the existing Lambd-CDM model. I don’t think my brief review of the problems associated with Lambda-CDM did anything to change their opinions, so that when it came to presenting conceptual alternative cosmological models, I was not speaking to a very receptive audience.

Having recently attended the Euclid meeting discussing the history and future of Lambda, and having heard the astronomers’ pleas for new thinking from the cosmology community, this leaves me very concerned that there is a major disconnect between the two communities and that cosmologists are just not taking up the challenge thrown down to them by the astronomers.  That does not bode well for a speedy resolution to the crisis in cosmology that so may scientist do believe exists today.

This public discussion meeting was held in conjunction with the annual meeting of the Euclid consortium, at University College, London. The title reflects the fact that this year marks the 100th anniversary of Einstein’s paper in which he first introduced the concept of a cosmological constant (actually published on on 8th February 1917).  The discussion was led by  Profs George Efstathiou (Cambridge) and Ofer Lahav (UCL).

Of particular interest was Ofer’s opening talk on the historical background to Einstein’s paper, and the fact that it Lambda was initially introduced to solve a boundary condition problem associated with Einstein’s formulation of GR, rather than to achieve a static universe, as is commonly assumed.

George’s talk  explored some of the possible explanations for Lambda, and the reasons why it might have the currently observed value.  The ensuing discussion covered a wide range of possibilities, including the contentious employment of the anthropic principle.  George’s concluding remarks contained a plaintive exhortation for theoretical physicists and the cosmology community to come up with new theoretical models that could explain Lambda.  In his view, unless there was a paradigm shift in our cosmological model, the astronomy community was doomed to measuring the properties of a mythical substance, Lambda, to ever greater degrees of precision.

After a lengthy gestation period, the video of the Apple and the Maggot is now complete and uploaded to YouTube:

What, you may ask, has this got to do with cosmology?  The answer is that it is one element in what is likely to be a very lengthy process of inducing a paradigm shift in the way we view our universe.  There is over 100 years of history behind the expanding universe model that we currently take for granted. It is going to take a massive leap of imagination for the scientific community and the general public to comprehend that there is an alternative way of looking at the cosmos that is not only consistent with observational data, but is also able to explain the current cosmological conundrums.  It requires a change in our perception of our place in the universe that is at least as drastic as the transition from the Ptolemaic, Earth-centric, universe to the Copernican heliocentric universe.

This short allegorical story is a first small step in that transformation. Enjoy!

Being unable to post the new paper to arXiv, I have had to resort using to viXra as a repository. This is very much a second best option as:

Nevertheless, it does offer authors the ability to register their publications in a date stamped repository, thus establishing intellectual property precedence. Now that it is registered, I am at least able to cite it in any future papers relating the this topic.

After a wait of over two weeks while my submission was ‘on hold’, I finally received a communication from the arXiv administrators, basically wanting to establish whether I was a proper ‘professional’ researcher with an academic affiliation.  It would appear that they were not satisfied with my response (I do not currently have an academic affiliation) and therefore deleted my submission, inviting me to submit instead to a conventional peer review journal.    That should work well!

I was not entirely surprised by this response, having undertaken some follow-up research on the issue of arXiv censorship of non-approved authors or papers containing new physics.  So apparently if you are not a member of an academic institution, or you are an academic but have some novel concepts that you wish to communicate to the scientific community, then arXiv don’t want to know.  Just as well Einstein was not trying to publish his Special Theory of Relativity today!

I possibly spoke too soon.  My attempt to post my latest paper was blocked by arXiv because I need an endorser.  Although I have previously posted several papers to the arXiv, apparently because these were published some years ago, their new procedures require that I go through the same endorsement process as a new author.

Luckily I do still have several colleagues in the physics research community who were prepared to act as endorsers, one of whom kindly agreed to do so on this occasion.  So I have now been able to post the paper to arXiv.  Let’s see what happens next.

After many months of work, this paper is now ready to unleash on the scientific world.  Quite a relief to have finally got to this point.

I will be posting to arXiv tonight.

Up to now I had been calculating the gravitational potential arising from a collapsing galactic gas cloud, under the Holochronous model, using a numerical simulation in Excel. Obviously this is not ideal when it comes to presenting the results in a scientific publication, and I was confident that an analytical solution must exist, if only I could get me head around the concept of integrating a 4-dimensional density function. I am pleased to say that I did eventually managed to come up with the solution with nothing more than basic A-level calculus. I am still not quite sure what the underlying meaning is of the process that I have been using. It seems akin to the integration of a Lagrangian 4-density, in which case the end result driving the gravitational potential is a scalar action. Go figure! Anyway, the results agree with the simulation, which is good, and the 3 parameters of the resulting formula allow fitting of the calculated rotation curves to a wide sample of elliptical galaxy observed rotation curves, which is even better. 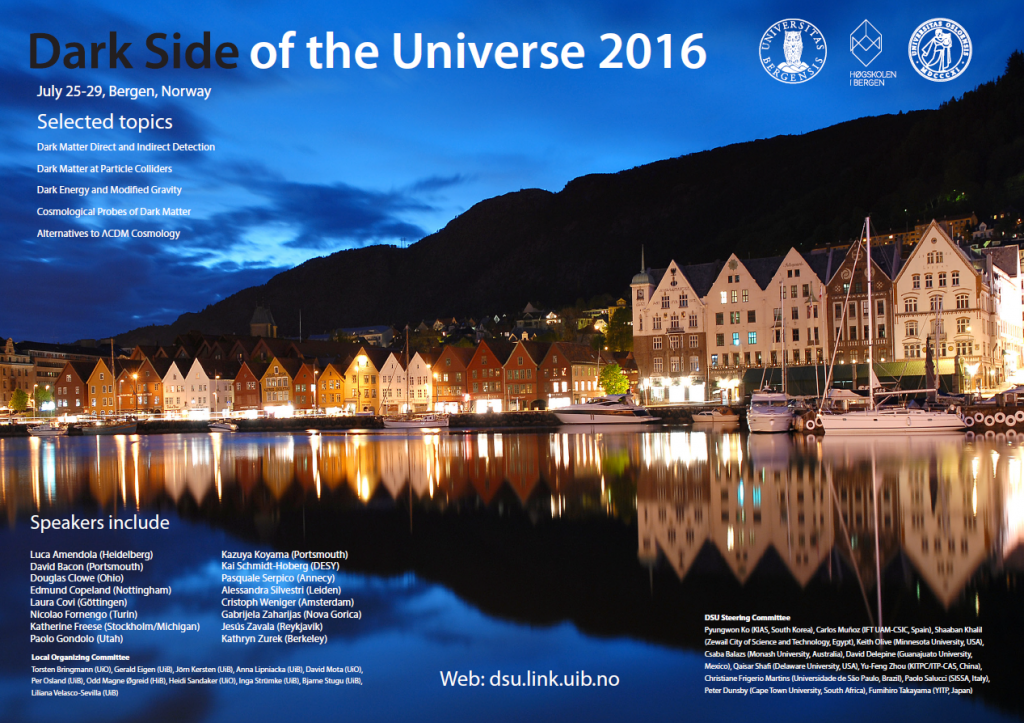 Just registered for the DSU conference in Bergen, Norway.  With the agenda being concerned solely with Dark Matter and Dark Energy, it should be the ideal opportunity to launch my forthcoming paper on the Holochronous Universe.

The Lost-in-Spacetime blog is intended to cover topics that may include: